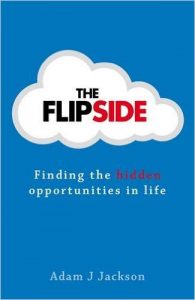 1. What is The Flipside?

The Flipside is based upon a simple and inspiring idea: every problem or setback in our lives, however big or small, contains within it an equivalent or greater benefit or opportunity. It explores what I believe is one of the most exciting and life-changing phenomenons I have come across. It demonstrates how and why the adversities that we face in life can actually become the catalysts for greater success.

2. Why did you write The Flipside?

The theme of The Flipside is something that I came across when I met two men both paralysed in accidents – one was paraplegic, the other quadriplegic – and both said that they had been far happier and their lives more enriched after their accidents than they had ever been before. I wanted to find out how and why these two men and people like them, people who had experienced setbacks and real adversity in their lives, had managed to turn their experiences to their advantage. It made me think about my own life and the problems that I had faced; in particular, as a child I had been diagnosed with a chronic, incurable skin disease called Psoriasis. What could be the Flipside for me? Over the years I kept coming back to these questions; were there opportunities to be found in life’s setbacks and, if so, how do we find them?

I wrote The Secrets of Abundant Health Wealth Love & Happiness because I was fascinated by the key common factors found in people who had achieved abundance in their lives.

The Flipside grew out a fascination with the stories of people who had come through trauma and adversity in various areas of their lives and had actually turned their adversity into something that enhanced their lives. Were those people just lucky,the random benefactors of Fate, or were there common threads in their stories?

3. Can you give some examples?

Sure. Take, for example, the story of Oscar Pistorius, a phenomenal athlete, and known as ‘the fastest man with no feet!’. Oscar was born with bones missing from his lower limbs and ended up having his feet amputated when he was barely a year old. However, Oscar became a world beating athlete and one of the reasons he is so successful is precisely because he lost his feet at such an early age. Oscar instinctively learned to build extraordinary strength in his upper legs and upper body, just to keep up with his friends and brothers when he played with them, growing up.

The Flipside is filled with stories of ordinary people who have found a flipside to their adversity and then goes on to explore the common factors in those stories and in the beliefs and strategies of what can only be described as some of the most inspirational people you could ever wish to meet.

4. How does The Flipside compare to The Secrets of Abundance series?

It’s different, in the sense that the Secrets of Abundance series were parables albeit based upon true stories and very much focussed on a specific theme. You’ll meet real people with real-life stories in The Flipside.

The Flipside is focused on what I believe is perhaps the most important factor in achieving lasting success and happiness – how we can benefit from any seemingly adverse experience. The subtitle—Finding The Hidden Opportunities in Life—is supposed to reflect the fact that opportunities are all around, all of the time. They may be hidden, but by asking the right questions, they suddenly become evident, and from that point, everything changes.

The Flipside is divided in three main parts: the first part A s an attempt to explore the concept that every problem contains an opportunity. The second part looks at the common threads in the stories of people who have found the Flipside. Why do two people who experience the same event end up in contrasting places? In exploring these questions, it became apparent that there were very interesting differences in character and personality traits that affect our lives far more than any single event. Time and again, specific beliefs and attitudes, and personal strategies were common to people who found the Flipside. Then, I discovered that some of these factors have been explored by psychologists and behavourists in universities all over the world. The results were startling.

5. What was your most memorable experience in researching The Flipside?

I met so many incredible people! Mike Jetter and his wife, Bettina have become friends. Their story was particularly important to me because a very good friend is currently going through a very similar crisis as the one Mike faced. Together, Mike and Bettina faced terrible odds of Mike surviving Chronic Myeloid Leukemia. Despite repeated setbacks, not only did Mike survive, but through the battle Mike and Bettina transformed their lives as well as so many other people all over the world.

Another person I met has been a personal hero of mine for quite some years. As an amateur magician, I had fascinated by the work of Richard Turner (also known as ‘The Cheat’). Richard can manipulate cards like no other man I have seen. He can deal cards from virtually anywhere in the deck – the second card, the bottom card, perhaps even the middle card – and he can do it slowly in front of your eyes and you would never know what he was doing. Richard is also an accomplished Martial Artist and won many full contact fights. Yet, incredible as it is, Richard is completely blind. But, what was more remarkable, is that Richard says his blindness actually helped him in what he has achieved in life.

6. What do you want people to take away from The Flipside?

My hope is that readers will come away from the Flipside changed, feeling inspired and empowered when faced with problems or adversity in their own lives. Once we have a realization that every problem we face contains an opportunity to change our lives for the better, life takes on new meaning. I believe that it highlights a new side of life, a side that is full of hope and possibility. For me, The Flipside is more than just an incredibly powerful and uplifting idea; it is literally life-changing.

7. I noticed that the Flipside is dedicated to Sam Chapman. Who is he?

Sam Chapman is the eldest son of very good friends. At the time of writing, Sam was diagnosed with Acute Myeloid Leukemia. Sam is an incredibly talented youung man; a top scholar and athlete who was training to compete in Australia’s olympic team when he was diagnosed with his illness. He is an incredibly brave and courageous young man. My hope is that Sam is going to find an enormous Flipside, and when he does, his story will feature in a future edition of this book.

If you haven’t read The Flipside yet, you can order it using the link below.